The stewardship of Inverneill House is a most enormous privilege. Embodied in its walls and gardens is a legacy left by traditional stonemasons, slaters, lead workers, joiners, stained glass makers, plumbers, electricians, ironworkers, cooks, housekeepers, shepherds, stable hands, gardeners and more, none of whose names appears when you search online for the history of the house. Were it not for the unsung contributions of so many skilled and kindly people, much would by now have fallen irredeemably into ruin, enveloped by an impenetrable tangle of that most invasive of Himalayan plants, rhododendron ponticum.

When the stewardship passed into our hands, an array of buckets and tubs brimmed with foul green water that had penetrated the roof and run down the walls around the dislodged windows. The putrefying corpses of incautious mice floated on the surface. A smell of damp and mould assaulted the nostrils. All around, holes had been gouged out of the lath and plaster walls and ceilings, and of the old floorboards, evidence of an uncompromising, muscular effort to expose and surgically remove all of the rot and decay that had set into the fabric of the building. Exposed wires bristled menacingly from the walls and ceilings. The central heating had been ripped out, leaving just holes in the floorboards where radiators once stood, and remnants of pipework in the walls through which gas once fed a boiler inside and combusted gases vented back out.

The cold, damp air in the house chilled the body to the bone. Lighting the wood burning stoves created small areas of warmth in which to gather, but drove damp out to the exposed stone walls where it condensed and ran like breath exhaled on a cold window.

The uncomfortable sense of cold and damp found professional quantification by surveyors, whose voluminous reports censured the house for its huge appetite for energy and its enormous carbon footprint.

The priorities for the house were abundantly clear: fix the leaking roof, drive out the damp, insulate the walls, ceilings and floors, and identify a way to sustainably heat the building.  Pretty much everything within the thick old stone walls needs to be replaced with modern, high efficiency technology: roof, wall and ceiling linings, wiring, lighting, plumbing and heating.

Outside the priority was also clear: a relentless onslaught on the rhododendron ponticum, clearing the drive, the walls of the garden and the woodland. Only then can the turrets and high wall of the walled garden be properly inspected and attended to, and the surviving specimen trees and shrubs in the gardens identified and protected.

It is now late June, 2019. Huge progress has been made. The roof has been completely re-slated and all the leadwork in the flashings and parapet gutters replaced by Colin Meikle, very capably assisted by expert slater and lead worker Colin Gilmour. The internal walls have all been insulated with PAVATEX wood fibre insulation, except in the stairwell where only conventional insulation board would fit. The windows have been replaced with new, energy efficient PVC sash or tilt-and-turn windows, which provide fantastic views over gardens, coach house and loch. Beautiful wooden moulding hand crafted by Marcin Sprengel is being installed around each window, including very elegant wooden shutters in the main bathroom. Repointing of the outside walls is well underway, and already appears to have eliminated the penetrating water. Two bedrooms have been fully sheeted and painted (ceilings, walls and woodwork), using VELSPAR “Freshwater Pearl” to match the reddish tones in the sandstone of the walls of the house and walled garden and white eggshell for the woodwork. The main bathroom has been fitted out so that it now has a working shower, bath, sink and toilet. The tile design is based on Annan sandstone (REGIONAL REFLECTIONS Annan Tile). The flooring is based on travertine (KARNDEAN Art Select Caldera). The vanity unit and cabinet above are from IKEA, selected to match the warm grey in the flooring and shapes of the room and bath). The rewiring by Iain Meikle is almost completed, with energy efficient recessed ceiling lights being installed in all rooms along with ample sockets and light switches at easily-reachable heights. The wood burning stoves have been much used to warm the house, most recently with rhododendron ponticum cleared from the gardens, but all rooms have now been plumbed by LDW services for central heating radiators, which will be installed as soon as the walls have been painted. Regretfully, heating will be provided by an oil-fired condensing boiler rather than air-source or ground source heating. The electricity power company insisted that it would need to charge about £70K to upgrade the power supply, even though the Inverneill wind farm is just up the road. Thanks to the dedication and skill of Colin Meikle, and the great team of people he has pulled in to help him, Inverneill House is well on its way back to a habitable, sustainable state, and in the best condition it has been in for many decades.

It is now early August. The power is on! The downlights in each room are wonderful. The bathroom is finished. Two bedrooms and a lounge area have now been painted and partly furnished, thanks to some great purchases at the Clocktower in Ardrishaig and the Red Cross charity shop in Lockerbie.

The keyboard purchased at the Big Ass sale in Ardfern has not yet generated the same applause as the fantastic groups playing at the Tayvallich village hall, but at least it helps motivate visitors to go out and explore the great scenery, or take a dip in the sea. The kitchen, although very grotty, is managing to produce some excellent porridge and litres of tea and coffee. Even the washing machine is performing, although it must be admitted that it is not yet properly drain trained. More assaults have been made on the ponticum menace, and these operations have been extended to include some areas of invasive azaleas. Bats are roosting in holes in the garden wall. Deer with fauns are grazing on the lawn. Manx shearwaters in huge rafts are congregating off Inverneill beach. Also the holy grail has been found and will shortly be installed safely in a turret. Now the big excitement is the possible installation of a phone line by BT, if and when they can find one spare. Taking on this renovation project has made it extremely clear just how vital infrastructure is to the health of the local economy.

As September draws to a close and with it the first anniversary of when we saw the house, much as been accomplished. All but the drawing room and hallway have been finished and painted. The central heating radiators have been installed and preparations made for the installation of the boiler, oil tank and hot water cylinders. Outside the vast bulk of the rhododendron ponticum has been cut, and most of it burned. Vistas have been opened up from the house right into the woods to the West and North, many areas of which had not been touched by sunlight for decades. Deer can now be observed foraging on the woodland floor, while parties of birds flit through noisily. Freed of the dense undergrowth of rhododendrons, the avenue of beech trees along the northern boundary looks magnificent. The re-pointing of the sandstone of the house has been labour intensive, but has made the house watertight at last. The re-roofing of the coach house has almost been completed, ready for a re-paint of the building outside and in. The sheep in the walled garden have grown well on their pasture, with clean white wool, and will be much missed when they leave, but this departure will open up an opportunity to begin planting fruit trees along the wall.

A visiting friend, who 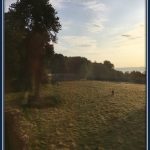 has been training under an opera singer, tested the acoustics of the walled garden by singing towards the house. His voice carried wonderfully right into the house. This bodes well for musical performances in the future!

We have reached out to the Council to see if we can be allowed to repair the turret roofs affordably, which would make them safe and preserve them for posterity. The walled garden was listed over 50 years ago, for good reason, but it does appear that no investment had been made in its maintenance since that time, so that the joy that its’ great beauty can offer to people had become inaccessible and lost from sight. By clearing away all the rhododendrons, by making the essential repairs and replanting, we hope to change that.

On a more personal note, we have taken a few lessons at the local Scottish Country Dancing group in Ardrishaig, and have expressed a heartfelt wish that the Inverneill House Dance be performed by them on the floor of the lounge. In the book “An Album for Mrs Stewart”, there is an extract from The Diary of John Campbell of Kilberry, which reads:_

The house is warm, even hot! The oil fired central heating is up and running. The drawing room has been painted, and presently hosts a table tennis table. The painting of the hall and landing is well in hand, as is repainting of the outshot. Huge areas of ponticum have been cleared and burned. The coach house has been painted in “autumn fern”, and is now in the process of having power restored. Inverneill House has now been brought back to life!