Special Thanks to Michael C. Davis author of “Scots Baronial Mansions & Castle Restorations in the West of Scotland”  for providing the following historical information on INVERNEILL HOUSE.

Knapdale first came under Campbell control in 1480, but the present Inverneill House owes its origins to one Campbell laird centuries later.  This was Col. Archibald Campbell, later Major General  Sir Archibald Campbell, K.B., who purchased the lands of Inverneill in 1773 for £3,038.  Although he probably did not build anything on the site, it was his accumulation of wealth that created the estate and provided the means for his successor to build.

Sir Archibald Campbell was an extraordinary individual.  His story is told in detail in “Knapdale People”, the website run by Heather MacFarlane.  However, although to summarise is to miss much of interest, it is clear that Archibald Campbell (as he started out) straddles a number of themes significant in the West Highlands at that time.  He was first and foremost a Campbell whose father and mother were of old gentry stock, descended from the Craignish line, but closely involved with the administration of the lands of the Campbell Duke of Argyll.  He therefore had easy access to ducal patronage.  He was also a younger son, which made more urgent his need to exploit his chosen career, which was a commission in the corps of engineers.  By 1768, he had risen to become Chief Engineer in Bengal for the East India Company, and organisational talent was beginning to show. So too was skill as an entrepreneur and developer, as an investor in the East India Company, and as a financier.   In 1771 it was no longer possible to hold positions in both the Army and the East India Company at the same time, and he decided to further his career in the army.

His investment in Knapdale lands, which began in 1773, was by the 1780s yielding around £1,550 per annum.  The lands of Inverneill and Danna were not big earners compared with his other schemes, but clearly were important in his thinking.  Land gave social standing, and West Highlanders who had made money abroad often invested in their native heath, even when also purchasing more elegant and productive acres elsewhere.  The year following his purchase of Inverneill, he managed his election as M.P. for Stirling, presumably at some cost.   He remained M.P. from 1774-80 and from 1789-91.  This did not stop him becoming active as a soldier in opposing the American revolution.  By 1776 he was a prisoner of the Americans, after an adventurous fight at sea.  He was a Colonel in the army, an M.P., a prisoner of the Americans, an active businessman, and a landowner in Argyll, all at once.  Indeed, while a prisoner he purchased Knap estate in 1776 for £4,852.  He was freed in 1778, in an exchange, and in that year led the successful British attack on Georgia.  By 1779, he actively furthered his connections by marrying a daughter of Allan Ramsay, the Scottish portrait painter.  This brought important London connections and he gained his knighthood soon after.  The same year, he bought the lands of Taynish.

From  loyal soldier and successful general (though noted for his lack of bitterness and his concern to avoid civilian suffering), Col. Campbell of Inverneill became Governor of Jamaica, where he would have found many Argyll connections and relatives, in 1782. In the same year he received the title of Major General.   In 1784 he purchased Ulva, bringing an end to his amassing of land in Mid Argyll.  In 1786, General Sir Archibald Campbell of Inverneill became Governor of Madras.  He showed great energy and organisational skill there, but his personal involvement in his Argyll  lands was limited by illness in 1789 (when he left India) and death in 1791.  He was buried, not at Inverneill , but in Westminster Abbey.

Campbell’s money, rather than the brilliance of the man himself, impacted on his Mid Argyll Estates.  Like many Argyll men “on the make” in those years, he must have dreamed of retiring to his Argyll lands and founding a dynasty to rule over them (while, like many of his Argyll contemporaries made good, living much of the year in London).  He purchased a house in Upper Grosvenor Street, London, just before his death!

The real beneficiary of Sir Archibald Campbell’s policy of land acquisition was his elder brother James who succeeded to his land, most of his money, and his title.  Sir James was also involved in politics in Stirling, becoming MP there also, and having also had a military career.  To such men on the make, the patronage of Clan Campbell and the connections they won, together with their own not inconsiderable talents, had been essential in their rise.  Their world view remained coloured by the process which had formed them, and the progressive Hanoverian patronage they had received as their due of birth as well as of effort, made them proud to be members of an exclusive Clan.  Hence, the value put on territorial designation – of Inverneill – and on the ownership of land in Argyll.   Although, in real terms, the death throws of the clan system were all too evident, ducal involvement in British government had given Clan Campbell an Indian summer of mafia-like access to power.  Although Ducal influence all too soon waned, the kudos of ownership of land cast a long shadow.

It is not really completely clear to what extent the early Campbells of Inverneill actually lived on their Argyll lands.  There may have been a mansion house of sorts on the lands when Sir Archibald bought the estate, probably located at NRc.841811, according to the RCAHMS Inventory of Argyll, Vol.7.  It may even have been a small  tower house, for the tradition of this area being known as “the castle garden” is known.  Sir Archibald is said to have intended to build a new house, but only laid out an avenue to the intended site. When his brother succeeded, Sir James already had a house on his own lands of Killian or Killean, near Inveraray.  It was probably therefore Sir James who built a completely new, late-Georgian house at Inverneill before his death in 1805.  This was the simple two-storey house, three window-bays wide, which can be seen in old photographs.  In all probability, the two-storey block with a curved, front-facing bow was a slightly later addition, possibly built by his son (the third and last Baronet) who died in 1819.  The family seem to have referred to it with elegant understatement as “the Cottage”, though another commentator in 1840 described it as “a good, substantial mansion”!

Inverneill House and its walled garden were described by a member of the family around 1840, or possibly before:  the house was “entirely covered with creeping Ivy, Honeysuckle and Roses”.   “The Bed Rooms in the bow with the large windows are delightful and have each a dressing room… A small river crosses in rear of the Cottage, and it is quite embosomed in Walnut, Elm, Chestnut, Beech, Pine and Ash trees, some of immense size.  There is a small look out tower near the Cottage with a Telescope commanding three fine views thro’ the wood of the sea, which is only a few hundred yards distant.  The Cottage contains a dining and drawing and 8 bed rooms, besides House Keepers Room, Servants Rooms, Pantry, Kitchen and Scullery…  The Garden is one of the finest in Scotland – fine fruit and vegetables of all kinds”.

The walled garden is of particularly impressive scale, incorporating two turrets, elegantly designed in a post-Robert Adam castle style.  These turrets have Palladian tri-partite windows and their effect is particularly fine.   The garden wall is tall impressive in scale and effect, reminiscent of the garden at Kilmory near Lochgilphead, also built for a Campbell busy trying to make money abroad.  The above-quoted account of the”Cottage” and walled garden is illustrated with sketches and, significantly, one of the turrets is described as “dear Lorne’s Turret”.  Since Lorne Campbell was killed at the battle of Alexandria in 1801, the turret and garden wall must have been built before this date, or possibly at the time of his death so that it might figure as something of a tribute.  The mausoleum is dated 1802, suggesting that building work was certainly going on at that time.

A map of proposed alterations at Inverneill, dating from 1827 (when the laird was John, a half-pay Captain in the Scots Fusiliers), shows that there was a plan to build a mansion on a completely new site in the centre of the fields between the farmhouse and Loch Fyne, to be approached by winding roads on either side.  It never was built, but the map does of course show the walled garden and the Cottage as extant by that date.

The Campbells of Inverneill continued to own Taynish Estate until 1929, and it has to be remembered that they also had a house on that property which had been gradually enlarged by them in the late 18th and early 19th centuries.  Very likely, when in Argyll, members of the family used these houses as shooting boxes, for social visits to other landowners, and to attend to business matters on their sprawling and not very productive lands.  Additionally, the subsequent Campbell  lairds of Inverneill seemed to have largely continued a tradition of loyal service to the Crown in the armed forces, and must have been absent from Scotland for long periods.

By the later 19th century, there was clearly a greater need for increased accommodation at Inverneill, and this was addressed in the 1890s when, before 1897, Ronald Carswell (from local Lochgilphead architect, Neil Gillies’ office) designed a castellated tower addition to the house.  It may have been at this time that the walled garden was lowered in height adjacent the new wing to permit a view from the windows of the new drawing room. 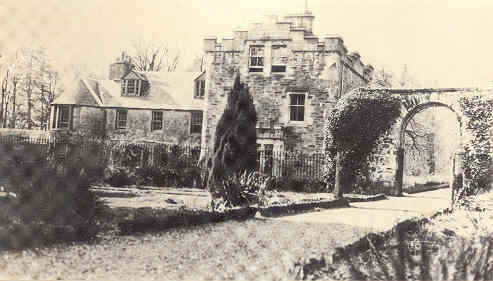 The Campbells of Inverneill sold their estate in 1954 following the death of Col. Duncan Campbell. His sisters, Una and Olive lived on for some time, moving to a large villa, Alt-na-Craig, on the outskirts of Ardrishaig.  Miss Una , who lived to a ripe old age, had a great deal of charm and had proved adaptable to changing times.  Things had not changed too much, for the elderly Campbell sisters continued to employ house-maids for the rest of their days.

The succeeding laird of Inverneill, who effectively presided over the loss of Inverneill, was ironically John Lorne Campbell of Canna and Inverneill, whose contribution as a scholar and folklorist of Hebridean tradition, culture and issues is well known.  The period of Campbell ownership is hence wedged between two outstanding individuals.

The Inverneill estate found itself post-1954 in several ownerships, and modern development of bungalows gradually followed along the roadside, so that Inverneill today (or Inverneil  with one “l” as it is more usually spelled today) is familiar to the traveller as a hamlet.  Not long after the sale of the estate, drastic action was taken to reduce the mansion to a size considered more appropriate to modern life.  The result was the demolition of the Georgian portions of the house, leaving the tower freestanding with a new entrance hall. Given the dramatic nature of the change, the surviving portion stands well as a house in its own right, and groups well visually with the  approach along the side of the garden wall.  With considerable history behind it, with an impressive Victorian tower-house, and with a Georgian walled garden of imposing proportion ornamented with two castellated corner turrets, all set within wooded grounds, this is indeed an atmospheric place.